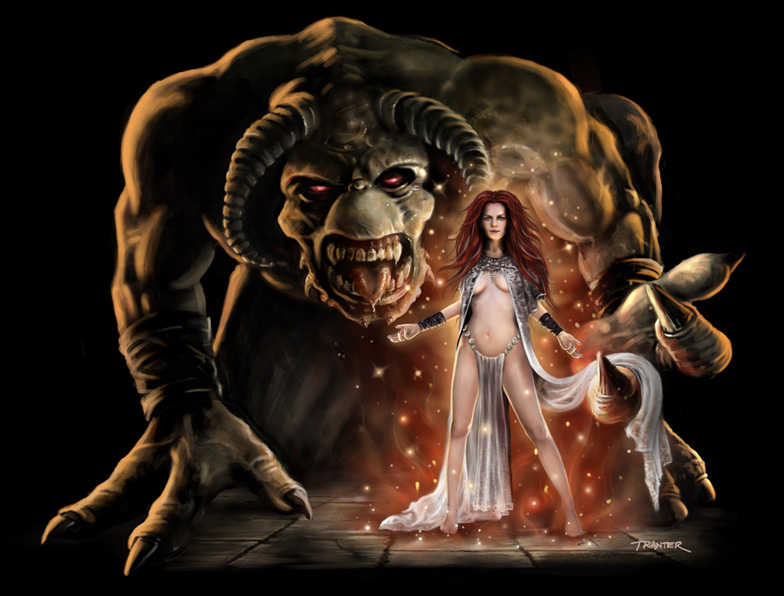 Darkness is returning…it is felt throughout the lands.
Fear, suspicion and misgivings plague many regions of Arcadia as the shadows grow ever longer.
Ilkor, The Goddess of Darkness, is plotting her revenge from the bowels of the Underworld where ages gone she was once banished.
It is a time of uncertainty, a time for the brave & fearless to make their mark, take a position & carve their name into the tomes of history forever.

Ilkor: Dark Rising is a hand moderated Fantasy Play-By-Mail Game that is currently in beta and looking for brave new adventurers to help playtest.

Make The Adventure YOURS

Your character starts with some gold coins and the clothes on their back.
The rest is up to you.

How does it Work

The game has been designed to cater for many thousands of players immersing themselves in a rich persistent world.  The fantasy world of Arcadia is huge, spanning 5 massive continents rich in detail and diverse in nature and wonder.

Players control a single character they create at the start.  The game is run by the GameMaster.  Players write down their orders on a ‘turnsheet’ which is then submitted to the GameMaster.  The GM processes the turn and constructs the results in narrative form and sends it back.  This cycle repeats for as long as the player wants to play, which can be many years.  Over the years the PC advances in skill, power and fame.

This website is central to the game, providing both the rules & world setting as well as rumours, news & gossip from players and the GM alike, list of all known adventurers and access to any guilds, societies and factions you may be a member of.

PBM stands for Play-By-Mail. It’s gaming hobby that was popular back in the 80s and 90s.  Today very few still exist.
Ilkor’s strengths and uniqueness comes from harnessing the many great features from the PBM hobby and blend them with modern tech.

Based on Microlite 20 System

Ilkor’s core mechanics stems from the awesome M20 Gaming System.
It has been heavily modified and customized so that it works for the style of PBM Gaming.

Players start by creating their character.  The PC will be placed into a starting a city and free to roam the fantasy World of Arcadia, as they see fit. There is no limitation to what your character can do.

The gaming world is massive.  It’s persistent in which every player co-exists, quest together and form history.

Capacity for 1000s of Players

Due to the sheer size of the playing map the game has enough space for many thousands of players.  The more players the more ‘alive and active’ Ilkor will be.  To cater for more players the game will require more GameMasters to join and help.

The world is made up of 5 huge continents (regions).  Each region has a name and have been given a colour.
Caledon (the Blue Region) is currently the only ‘open’ region accepting new adventurers.  It’s massive.

Besides hand-drawn artistic maps of the different regions, the game play is performed on hex maps.  Good old fashion overland type terrain icons.
Caldeon (the only open region for game play) has over 70,000 hex locations.

Detailed maps have been created for each and every village, town and city, displaying every building and place of interest from a bird’s eye perspective.

This game is run and process by a human, the GameMaster.  There is no program or automation worth talking about.  The GM reads your orders and through the use of dice rolling and following the rules will determine the outcome which will be written in narrative form (like a chapter in a book) and sent back to the player.

Turnaround describes the time it takes between a player submitting orders (a turnsheet) to the GM and for the GM to process it, write the results and sending it back to the player.
The turnaround will vary, it time it could be a few days, maybe a week or even several weeks.

The Turnsheet is a PDF form that is editable, allowing the player the ability to fill in the orders.  The GM is also able to update the Turnsheet and include the results.
The PDF Turnsheet is either sent to you via email or will be available in your personal Vault on this website.

The ‘Character Central’ is the secure area of this website.  This is only accessible to registered players and who have signed in.  This provides access to various types of alliances, ability to gain access gossip, news and manuscripts.  Players are also able to update their public profile for all other adventurers to see.

When creating a character, a Class needs to be chosen.  There are 4 to pick from: Fighter, Wizard, Rogue, Priest.  Each class has its own pros and cons.
These are ‘base’ classes.  A player is able to mold their character over time to whatever sub-class type they prefer playing.

Player’s create their character from a choice of 4 races. Either a Human, Elf, Dwarf, Halfling.  All races have sub-racial groups too.  Each races have their own pros and cons.

Characters are defined by Abilities.  These are: Strength, Dexterity, Intelligence, Wisdom.  Generally speaking these abilities range from 3 to 18 and maybe even beyond.

There are 3 main sub-systems of the game mechanics that define pretty much anything a player attempts to do in the game.  These sub-systems cover Skills, Magic and Combat.

All PCs start at level 1 and through gaining Experience Points (XP) can rise up through the different ‘Class Levels‘.  At each level the character will be granted ability bonuses, skills, spells and other powers.
Advancement in the game is slow.  It is estimated to take about 8 real-life years to reach level 15.

This is a wonderful place to go and hear the various bits of news and gossip from other PCs from around the world.  This is available on this website to signed in platers only.

The Vault is available on this website and contains many different manuscripts.  Few are public, most either belong to individuals or to alliances.

The game has 3 types of alliances.  Each have their own purpose.  These are only available to signed in players on this website.  Secret Guilds are associated to a specific character class. Public Societies are run by the GM and a space for all players to post questions and obtain answers. PC Factions are created and run by players for their own chosen members.

Ilkor is 100% free to join and play.  Right now it is in playtest, but it will still remain free even post-playtest.

You will not be spammed with advertising in any shape or form, either on this website or via email.  Your email address is not passed on or sold to marketing companies etc.

The Regions of Arcadia 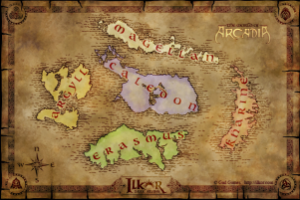 At the heart of the world is the more civilized blue region of Caledon, and its magical island of Annwynia, the “Home of the Gods.” Large populations of humans, elves, dwarves and halflings call Caledon their home, and the region has long flourished and prospered. All players begin their adventuring careers within the relatively safe region of Caledon.

This region of over 70,000 hex locations is open and accepting new brave adventurers. 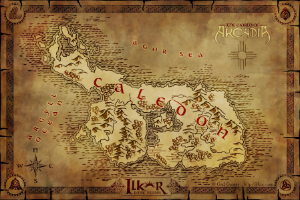